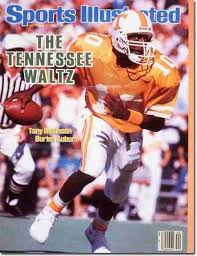 September 1, 1984, was my first introduction to Neyland Stadium.  Denise and I had moved to Graysville, TN, in May 1984, to serve in our first pastorate.  All summer long, the anticipation grew for opening game of the UT Football season!  “Preacher, you don’t want to miss it!  You’re gonna go with with us!  You’ve never seen anything like it before!”  Sure enough, that much anticipated Saturday arrived and car loads of men headed for Knoxville to watch UT vs. Washington State.  It rivaled the beginning of hunting season! We arrived in plenty of time to enjoy all the pre-game festivities and stayed for the duration of the game which UT won 34-27.  I was introduced to the checker-boards, John Ward on radio, the T, the blue-tick hound dog, Rocky Top, 105,000 screaming fans and some good football!  I must admit, it was pretty exciting!  After fighting the traffic, we finally got home around 2:30 on Sunday morning very tired.  Within a few short hours, I was up and at the church “trying to be on top of my game,” but that was downhill battle. J

Last night, several of us drove anywhere from 45 minutes to 1.15 minutes to Central Baptist Church, Greeneville, TN, to participate in their meetings with the Herbster Evangelistic Team.  An addition to the meetings for last night only was one of the best children’s preachers in the world, Mr. Bob Roberts, founder of Kids4Truth!  Wanting our folks, and especially our children, to participate in these meetings, we cancelled our own services.  We arrived in plenty of time to greet some the CBC folks and make our way into the auditorium.  There we were able to join in with others singing testimonial songs of praise to God; to hear the music ministry of the team;  to listen to the choir challenge us to be careful to not call Christ, Lord, and refuse to serve Him; to express our heart through “amen’s” and “praise the Lord’s”;  to hear the strong preaching of God’s Word; to see folks respond to the altar call; to fellowship with some friends we haven’t seen in a long time; to celebrate in the 40th birthday surprise for Mark and Mike Herbster; to just be with God’s people from all over, many that we had never met before, all gathered there to sing, cheer, listen, and “root” for the “home team!”

In the beginning of the service last night, Pastor Abbey of CBC, welcomed us and thanked us for driving so far to be with them in the service.  The thought occurred me, “Drive far?  We didn’t drive far.  It’s no trouble.  Why, I know folks who drive further and stay longer for a football game in Knoxville!”  Now, don’t get me wrong, I’ve been to my share of UT football and basketball games and was glad I went.  But, making preparation, driving the distance, and participating in the service around eternal things was really a joy; it was exciting!  We are on the winning team for all eternity!  I’ve watched our team win all day.  I experienced the joys of victory tonight!