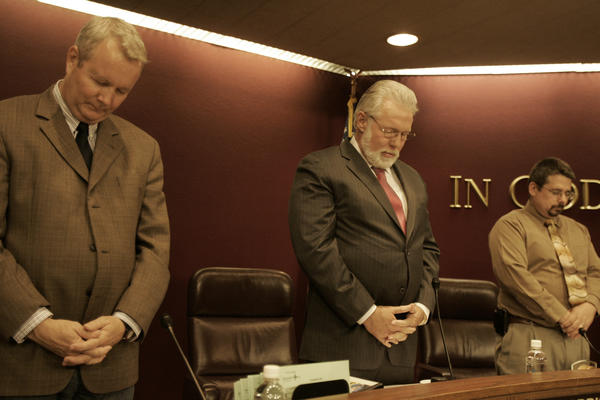 Last week, my wife and I had the joy of attending the Spiritual Leadership Conference 2014, Lancaster, CA.  Every service and every workshop was a gift from the Lord to worship and be trained.  Tuesday evening’s service was a tribute to the power of prayer and courage as the mayor and city council of Lancaster, CA, were recognized as well as the freedom legal counsel for their part in a recent Supreme Court Ruling.

In 2009, the City of Lancaster was sued for opening city council meetings in prayer.  Rather than bowing to the pressure of this liberal organization, as many other cities have done, Mayor Rex Parris (pictured above) and the city council took a stand for prayer.  The lawsuit spanned for more than two years and was argued in two courtrooms.

In a 5-4 ruling announced May 5, 2014, the Supreme Court of the United States held that opening prayers in open government meetings was not in violation of the Establishment Clause of the U.S. Constitution.  This applies, according to the court, even if the prayers are overwhelming Christian.  Justice Anthony Kennedy wrote for the court, “The inclusion of a brief, ceremonial prayer as part of a larger exercise in civic recognition suggests that its purpose and effect are to acknowledge religious leaders and the institutions they represent, rather than to exclude or coerce non-believers.”

When determining whether or not prayers must be generic or so general that no one would be offended, Justice Kennedy said, “The First Amendment is not a majority rule, and government many not seek to define permissible categories of religious speech.  Once it invites prayer into the public sphere, government must permit a prayer-giver to address his or her own God or gods as conscious dictates.”

May I encourage you to pray much for your governmental leaders?  Do not have a “well let’s just fold up the tents and go bury ourselves in the sand” attitude!!  As long as we are on earth, we can pray and spread the gospel because of our Mediator, the Lord Jesus Christ, seated at God’s right hand! Let’s be courageous on our knees and on our feet!

Therefore I exhort first of all that supplications, prayers, intercessions, and giving of thanks be made for all men, 2 for kings and all who are in authority, that we may lead a quiet and peaceable life in all godliness and reverence. 3 For this is good and acceptable in the sight of God our Savior, 4 who desires all men to be saved and to come to the knowledge of the truth. 5 For there is one God and one Mediator between God and men, the Man Christ Jesus, 6 who gave Himself a ransom for all, to be testified in due time (1 Timothy 2:1-5).